As you can see I had a lot of concerts planned to go to in 2020, numerous have already been returned. The last concerts in 2020 were Dota Kehr and The Menzingers at the Universum in Stuttgart. Great location – but I was only able to count to five. But a big thanks to Mathias, who convinced the doorman that the concert is only sold out -1, so we all got in: my daughters, my brother, Mathias and Izabela!

Now here again is the the music of 2020 which moved me. Thanks to all the musicians and bands who not only kept being creative but also did not hold up their music releases. Without concerts, new music becomes even more important to lighten me up. Starting with Sophie Hunger and her first release in 2020 with this text line:

Don’t forget who makes the music.

She published two phenomenal, very touching and versatile albums – there certainly are songs on the playlist. After Iza and after I saw her playing 2019 in the Roxy in Prague last year as a opener for Fink, I became even a bigger fan.

Now to my personal best pop song. No secret, I am a big fan of Iceland, the country, the landscape, the people and more than everything the beautiful music. But I am pretty sure this would have won the Eurovision Song Contest 2020 – if it would have happened. He will win next year 🙂 If you haven’t seen it yet – a very appreciative Netflix movie have been made and yes Will Ferrell may be a bit older. Daði Freyr was also my highlight on my personal best streaming event in 2020 – Iceland Airwaves. Wolfgang and I were always talking to meet there once. This year we made it together – virtually.

Also another icelandic musician is again on board with a fantastic album – the same that was on my list last year – Ásgeir published his fantastic album in icelandic again this year! And of course Ólafur Arnalds is on it again with his fantastic new album – some kind of peace. I couldn’t decide so I am breaking the rules with two songs of the album. His friend and collaborator Nils Frahm published a fantastic live version of “Fundamental Values” that we exepreinced in the Friedenskirche in Ludwigsburg last year – goosebumps are guaranteed with this version. And I will keep my Jazz Open tickets 🙂

The best punkrock album for me was this year is “Ultra Mono” by from The Idles . Two songs made it – I couldn’t decide euther. My favorite german punkrock album was surprisingly by Madsen, especially how Benjamin von Stuckrad-Barre eludes about Punk.

2020 was the year of collaborations for me – that is why slowthai is also three times on the list. And Nina Hagen collaborated with Funk hero George Clinton! As surprising Milky Chance collaborated with Jack Johnson for a very uplifting song much needed in 2020! And it goes on, I’ll stop now.

Please enjoy the list hopefully you discover some music for yourself or be delighted to hear it again!

Thank you for reading!
Bodo

P.S.: The only exceptions of songs not published in 2020 are at the end of the list. Iza pointed me to this band and it accompanied me throughout the whole year: Отава Ё!!!!!!!!!!!! 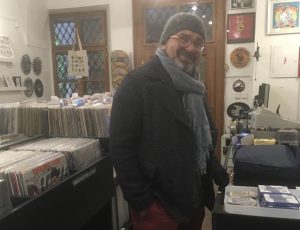